"And in fact there is some value in keeping distinct different views of history without collapsing them into one another, and I think this tension can be healthy rather than unhealthy." Edward W Said 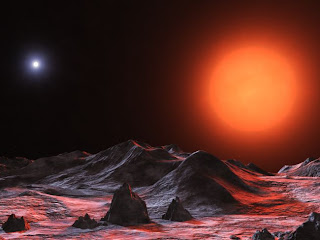 
"The double dawn had risen; the orange sun overpowered the wan light of the blue sun..." Kameron Hurley, God's War (2011)


From the descriptions in the book, the planet Umayma orbits either zeta Aurigae itself, or else another "Zeta Aurigae System"; obviously i am choosing to go with the former, since images of this star have been repeatedly attempted since the days of Chesley Bonestell. Curiously it has two other names which are never used in sci-fi OR astronomy as far as i can tell: Haedus I. & Azaleh. "Haedus I." affects my imagination differently from "Azaleh", & "Zeta Aurigae" differently still. Additionally, it is designated as HD 32068 & HIP 23453.


An earthlike planet might orbit the twin suns at a distance of 154 AU. If their combined mass is 10.6 solar, its orbital period becomes 590 years. From this distance the large star would seem to be nearly as large as our own sun seen from Earth; they would spread apart as widely as three times its diameter during the 2.7 year binary period. There are about 220 of these stellar revolutions in one planetary "year".


This is far from definitive. I really don't try all that hard to keep up with the innumerable new books as they come out, though i'd like to know which writers are the best among my contemporaries. (In the process, I've been noticing that post-"Nine Eleven" writing that fails to acknowledge this, in some way, makes me a little impatient.) What strikes me now, though, is how porous the previously-ironclad boundaries of genre have become, across the board. I would've thought the distinguishing feature of 21c writing to be its derivativeness, but instead i have to acknowledge there actually is quite a bit of originality nowadays, only not in the ways writers used to be original before.


I could easily make a different list just as long, but these are just the first names that came to mind. This would not seem to be a topic that requires defending, except for the prevalence of obtuse critics who think the Canon came down to us on stone tablets instead of being the product of chance, prejudice, & many separate acts of revision & recovery.