Lately Melanie has been talking about her "film bucket list" & so i thought i'd do mine. There really haven't been a lot of movies i wanted to see that i didn't get to (ones i did, include: The Last Days of Man on Earth (a "Jerry Cornelius" adaptation!), Incubus (the infamous William Shatner-Esperanto project), Beyond the Valley of the Dolls (even more dreadful than i expected), & 'Tis Pity She's a Whore (a truly giallo treatment of the lurid Jacobean play), Satan in High Heels (Grayson Hall), Chimes at Midnight, & (most of all) Play It As It Lays); more like it's those i always meant to get around to, but still haven't.


E.g. i adore Dreyer's Vampyr & The Passion of Joan of Arc, so why haven't i seen his other two (Day of Wrath; Ordet/The Word)? Or, there's probably just the one last Elizabeth Taylor movie i want to see--the unobtainable Raintree County. (Do i care about Reflections in a Golden Eye? Not that much.) One last Dominique Sanda: Beyond Good and Evil (she plays Lou Andreas-Salome!). One last Audrey Hepburn: Two for the Road. Another Paula Prentiss? I dunno...Is anything as good as Where the Boys Are or Man's Favorite Sport?. I think not.


Movies i missed while they were in the theater: Across the Universe, Howl, maybe (oh, surely not?) The Libertine or Burton's Alice in Wonderland; certainly the recent Corolianus. Chow Yun Fat as Confucius. And i wanted to see that (part-?) animated movie about the Chicago Seven trial (Chicago 10: Speak Your Peace)...


Classics: The Scarlet Empress; Wages of Fear; Black Narcissus. For my childhood's sake: Speed Racer. Lovecraft adaptations: The Whisperer in Darkness (silent!); Cthulhu: the Movie. Because i loved the clip on YouTube: "Turkish Star Wars". Impossible-to-find adaptation of a pulp novel i liked: A Dandy in Aspic. Julie Taymor's British-television Poe: Fool's Fire. Both versions of The Bell Jar (oh, the newer one isn't out yet?). Last "head movie": Skidoo (with Jackie Gleason & Groucho Marx). The Korean horror flick Gwoemul/The Host. Solomon Kane. Unfilmable novel: Under the Volcano. The Patti Smith documentary Dream of Life. Another doc, An Encounter with Simone Weil. Movies about artists: Stevie, Angel at My Table, Isadora...


And a movie i've read a lot about (since All That Heaven Allows): Douglas Sirk's Written on the Wind. When i see that i'll know whether i want it or Magnificent Obsession to own...


Number one would have to be: Berlin Alexanderplatz--supposedly Fassbinder's masterpiece. And number two, Freud, with Montgomery Clift as Sigmund himself. I only found it online once--& i was broke at the time.

A World Around Alpha Centauri 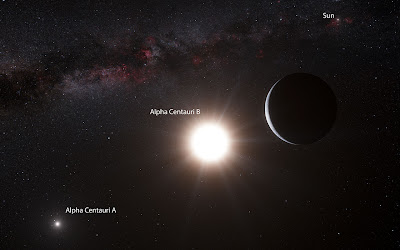 
Alpha Centauri Bb, a terrestrial-type planet of at least 1.13 Earth-masses in a 3.2357 day orbit around the K1 star of 0.934 solar masses, has just been discovered. I think i will call it Ravanastron. At 0.04 AU (my calculations give 0.041850045), the surface temperature is estimated to be 870 degrees Celsius--or, elsewhere, 1200-1500K. A veritable "lava world." (Curiously, there's already a petition to rename it "something more inspiring.") BTW, the orange star from Bb would appear 22 times larger than the Sun does from Earth.


Science fiction has not neglected this star. From time to time i look at it & dream, most recently as the planet Boaz... Perhaps the movie Avatar has defined it for the present generation, although for my money Alpha Centauri or Die! has got to be the most evocative title. Tangerine Dream did an album by that name, too. Meanwhile the old videogame is still remembered. 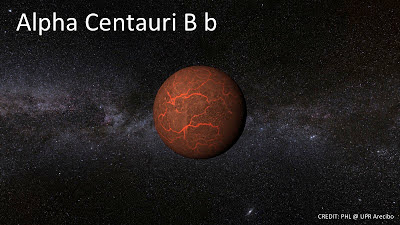 
the road is in my blood
though it lead but through 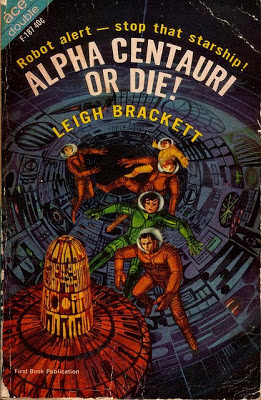