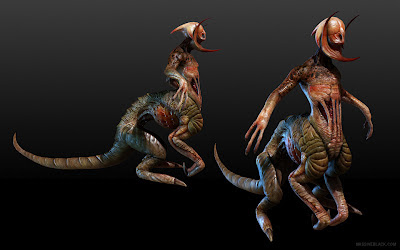 
At that distance the planet, which i will call Candaon, has a blackbody temperature of 305.0629588 K. It would definitely have a synchronous rotation*. The mass is given as at least 6.9 Earth's. Using densities from 0.85 to 1.15, the resulting radius ranges from 2.0 to 1.8, gravity from 1.7 to 2.1, and escape velocity from 1.85 to 1.95. If i postulate an albedo of 0.45 and a greenhouse effect of 50 K, this makes the average planetary temperature 40 degrees Centigrade--not a lot warmer than Earth. The star would appear four times as big as the Sun does from Earth; clement temperatures being closer to the terminator than usual for these planets, it would always be near sunset just above the horizon.


Much of the discussions about Gliese 581g & its "ribbon world" ecology apply here. Sophonts might very well be centauroid. I am going to go ahead & name the huge, perpetual, hot tornado that seems typical at the subsolar point of such worlds, "the Omphalos". (More discussion & images here and here. A new angle.) Fictional treatments include Zelazny's wonderful Jack of Shadows, and "Parasite Planet".


This star is supposed to be close to the notorious saucerian home star Zeta Reticuli. (This distance turns out to be some 23 light years; though closer to each other than to our sun, they are hardly nearest neighbors [see the Sol Station list]. Gliese 163 is actually in the adjacent constellation Dorado.)